Walking to B&Q in Peckham I passed Adam Kossowski's ceramic mural, The History of the Old Kent Road on the facade of the old North Peckham Civic Centre. Peckham isn't my manor so the mural is new to me.  The 1960s Civic Centre is now the Everlasting Arms Ministries Church and the current owners don't seem to be partcularly interested in the mural, but ceramics are pretty indestructible and, apart from a bit of Old Kent Road grime, this one is much as it was fifty years ago. The mural is also under the watchful eye of the 20th Century Society.

It depicts Roman Kent, the Canterbury pilgrims, the Jack Cade rebellion, the Civil War, modern industry, the Second World War and pearly kings and queens. The drawing and modelling are energetic, the lines are strong, the composition is bold and the handling of the ceramic medium is confident.  I was surprised that this good example of public art was unsigned and I had to do an internet search to find out who it was by.

Adam Kossowski (1905–1986) was born in Nowy Sącz, Poland, first studying architecture but then turning to painting. Following the German invasion in 1939 he fled eastwards but was captured by the Russians, imprisoned and sent to the Gulag. There, at Peczlag, he promised that - in his own words - “if I came out of this subhuman land I would tender my thanks to God. I hesitate to call it a vow, it was rather a promise to myself.” Much of his post-war work in Britain was religious and he became a member of the Guild of Catholic Artists.

Following an award for his painting Jesus Bearing the Cross, Kossowski was commissioned by the Carmelite friars at Aylesford, Kent, to paint a large tempera mural, The History of the Carmelites of Aylesford. They then asked him to make a large ceramic mural, A Rosary Way, which he at first doubted that he was capable of. He turned for technical assistance to the old Fulham Pottery, an interesting and odd choice because their resources were so limited.

“They were quite ready to fire for me the larger pieces of ceramics in their old-fashioned kiln, one not used anymore elsewhere, heated by coal and coke,” he said. “They could get only one temperature and one kind of glaze. You could not make any changes and I realized that every piece could be fired only once. So I had to put the colours and the glazes and the body in one firing only. It was a miracle that it came out quite alright, with very few small cracks. And the temperature had to be very high - at least 1200 degrees.”

Kossowski worked with the Aylesford Carmelites from 1950 to 1972. From 1953 to 1970 he made large reliefs and murals at his studio in Old Brompton Road, London, including a ceramic decoration for the chapel of St. Aloysius, Phoenix Road, Camden.

The History of the Old Kent Road, as a completely secular work, is unusual for Kossowski. Designed in 1964 and executed in 1965, it is his largest composition, comprising 2000 irregularly shaped tiles put together more like a stained glass window than a ceramic mural, the method dictated by the high relief carving of the individual pieces.

Public murals of this kind were popular in the decades after the war, a product of social reconstruction, public enterprise and a democratic ideal of art for the people.  By modern standards some of these enterprises can appear patronising, and the historical narrative of The Old Kent Road is fairly typical - recall the narrative of the South Bank Exhibition in the 1951 Festival of Britain, The Land and Its People. But the fashion for murals also produced abstract and playful works. Among ceramicists, William Newland, Kenneth Clark and Hans Coper benefited from it. This mural, by a painter who skilfully turned his hand to ceramics, falls so far outside the discourse of studio pottery that it didn't come to my notice until I was on an errand for emulsion paint. 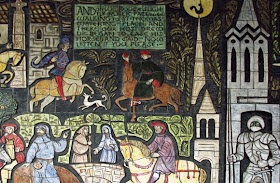